the pandemic is coming to an end!!

Be very careful what you wish for…. you just might get it!!  Aesop’s Fables were very wise to warn us all about THAT possibility. 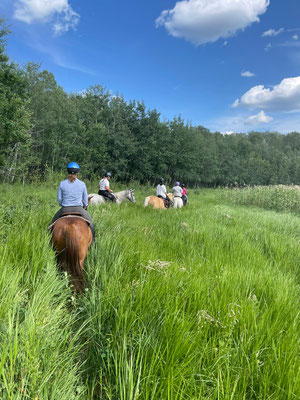 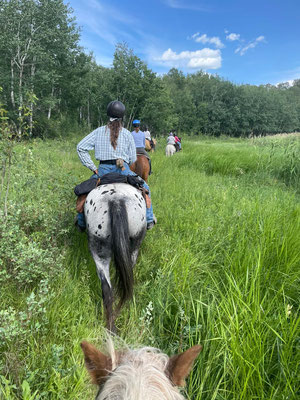 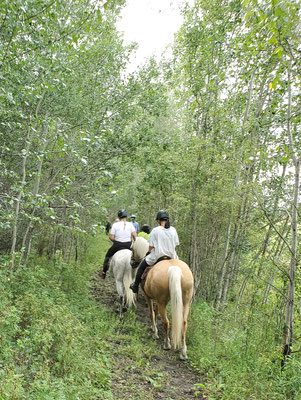 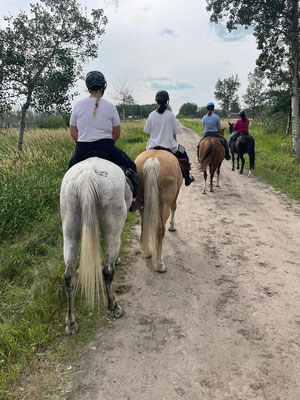 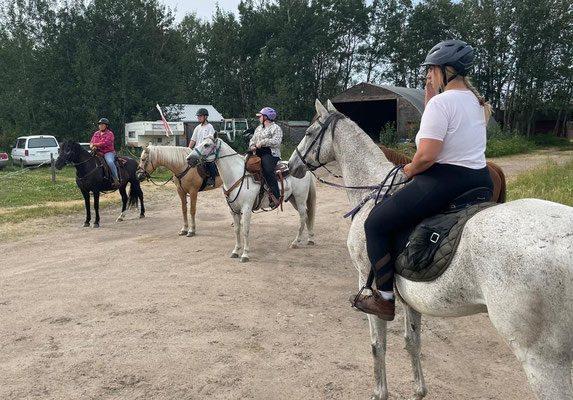 I announced we were going to go on an Adventure Ride on Sunday afternoon.  In the morning, Amanda and I discovered the cows had conveniently moved themselves to a closer paddock. We just had to open some gates to allow them access to the water troughs and they were happily munching on some fresh grass.  All but 2 of them were accounted for, Houdini, the bull, and #824-- the mother of the twins, were no where to be seen.  The cattle at the Home Ranch are not near anyone else’s cattle so why Houdini would wander, I hadn’t a clue.  Unless his lady friend was in season, and then he would follow her anywhere.  I was not unduly worried, as I felt that the cow would return, since she had a calf AND the only water is in the troughs.

We caught our horses, thoroughly covered them in pink SWAT (we could become a SWAT commercial at Winning Ways)and saddled up.  A couple of friends were going to ride with us, along with Jackie and her helpers. Seven riders left the yard on our Adventure Ride. As we headed east through the paddocks the horses spotted a cow heading in the direction of the corral where there was a hungry calf bawling.  In the next paddock the horses’ heads went up again, as they spotted another black bovine heading toward the East Pen where the trough is located.  It appeared the missing cow and bull were no longer on the AWOL list. That was a good thing.

We proceeded to the Lake Trail and headed down the hills, with the silly, fat pony, Jackie was riding, at the very back, where she seemed most comfortable. When we reached the bottom, we turned south to go around Hog Island.  Jackie went a bit further ahead in the line of horses and left me and another rider at the back.  All of a sudden, the pony bolted and tore off at a crazy pace trying to outrun the hornets it had suddenly encountered.  Jackie did some fancy riding and righted herself from the initial shock of the bolt and was sitting back upright, heading past all the other horses.  When Ellie (aka “silly fat pony”) caught up to the lead horse, Velvet, she planted her feet and came to an extremely abrupt stop.  I was very concerned about Jackie’s safety as I watched her go over the head of the pony!

Velvet’s rider, Loretta, got a ring-side seat to this calamity, that was apparently very amusing, as Loretta burst out laughing.  Loretta later said it was like watching slo-mo, the way Jackie went forward and slid down Ellie’s neck to land on her helmet.  From my vantage point it looked alarming, but from the front it appeared hilarious.  Jackie righted herself, commented that was why we must all wear helmets, wished someone had been wearing a GO-PRO to capture her wild ride, and got back on silly, fat pony.  We proceeded along the edge of the swamp, encountering a few more hornet’s nests as we went. Jackie and fat pony seemed a magnet for hornets and Jackie leapt off her plump mount at least once during these encounters.

My whole idea for the Adventure Ride was to do an exploration of the small creek that usually is 2 meters wide or even dry at this time of year.  However, THIS year it is over 10 meters wide and while not up to my stirrups, it was up to the horses’ knees in the middle.  But I get ahead of my story.  Dale and I had to go from the rear of the ride to the front, in order for me to discover if it was safe to walk across.  Dale showed no hesitation in crossing and went straight through, Velvet, on the other hand, walked out a horse length, and started to paw.

A horse pawing in water, leads to a very wet situation, and I think Loretta got very well showered with the green, swamp water.  Usually pawing horses will lay down in the water when they stop pawing, this was not the best outcome, and I encouraged Loretta “Look ahead, look where you want to go!  Keep pushing her forward. Keep going!” Loretta kept Velvet pointed across to the other side and kept her moving. They arrived beside me somewhat wet.

Jackie’s group crossed as a herd, despite my instructions to go one-at-a-time.  As they reach me, Jackie’s horse stepped over some wire, so I asked everyone to dismount in case the wire got dragged under another horse’s feet.  Unexpectedly, I heard distress from the other side, I looked back to see Slim with Amanda on board, launching into the water at a rather frantic pace. Since Slim is not the bravest horse, and he felt left behind, he was frantic to get over to Dale.  Thankfully Jackson is not as easily frightened as Slim, and came across the water actually observing where he was going.

I was able to cut the wire and rolled it up and away from where the horses were.  Meanwhile, I asked Jackie to look for a way to go up toward the road from the Lake.  Apparently, Jackie’s searching skills should have been tuned to trails and not hornets, but hornets is what she found!! Since she was on foot, she could not get away rapidly, and, you guessed it, she got stung, right on her behind!! Of course, so did Ellie—both of them came leaping back to the rest of the riders rapidly. At this point I decided I had had enough Adventure for several rides and suggested we head home.  Jackie gratefully approved of this idea.

I wish I could say the way home was less fraught with adventure but no….

Jackie discovered that, during her first wild ride where she landed upside down, her cell phone had left it’s case and was now missing.  We had to return the way we had come, so we knew that we must be careful in the area where she had slid off.  Of course, that was rather close to one of the hornet’s nests, so I was concerned for everyone’s safety again.  Fortunately, Jackie has a smart watch that allows her to “call” her cell phone, because we were in a dead zone down by the backwater.  Without the phone signalling it’s location, I very much doubt it would have been found.  But find it Jackie did, so now we could move on.

However, about the time Jackie picked up her phone, one of the other horses appeared to have been stung. I advised the riders to get out of that location.  Jackie was unable to remount Ellie, because the fat pony was now desperate to catch up to her friends, who were moving away.  In fact, Ellie literally dragged Jackie along for quite some way, before I told Jackie I would lead the pony.  It was amazing how Ellie immediately changed her demeanour when Dale stepped in front of her and both he and I insisted she walk quietly. When we caught up to the rest of the riders, Jackie was able to safely remount.  We put the fat pony at the back where she seems the most relaxed, to negotiate the hills up from the Lake.

While I closed the gate, the fat pony had another melt down about a fly in her “basket”. (We use baskets as a covering over the nose to prevent grazing on the trail—did I mention Ellie will eat incessantly while being ridden?) Jackie removed the basket and Ellie was able to resume her munching on the smorgasbord of grass in front of her.  Ellie doesn’t just grab a mouthful as she goes by, as my horse does.  NO! Ellie whips her head down, thus stopping her forward motion and tearing the reins through the riders hands. Jackie did not tumble over the front, but her fingers got rubbed raw from the constant pulling.

When we returned to the yard, we held our little debriefing circle to see how everyone felt about their ride.  Loretta was very pleased with Velvet since that was the first time they had led a ride.  Frigg’s rider was worried that Frigg may have upset the other horses, but I assured her that Frigg’s jigging didn’t hold a candle to Ellie’s antics.  Amanda was still thanking Slim for not dumping her in the green, slimy water at the creek. Liz and Valkyrie had a good ride.  Sandy was pleased that Jackson turned in a very good performance out on the trail.  I warned Jackie that I was going to write a story about our “Adventure,” and I might quote what she said.  Jackie and I both agreed that after that many hornets we didn’t want to go riding out, until the frost froze the horrible little creatures. 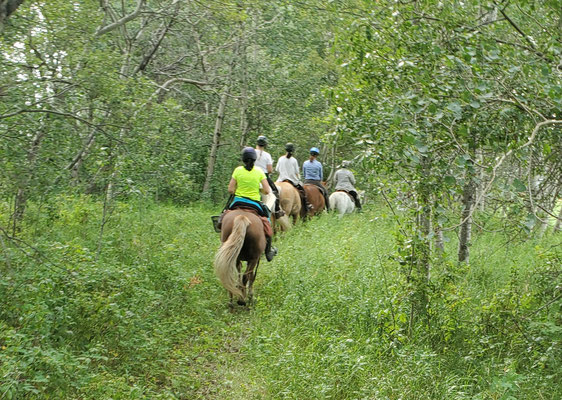 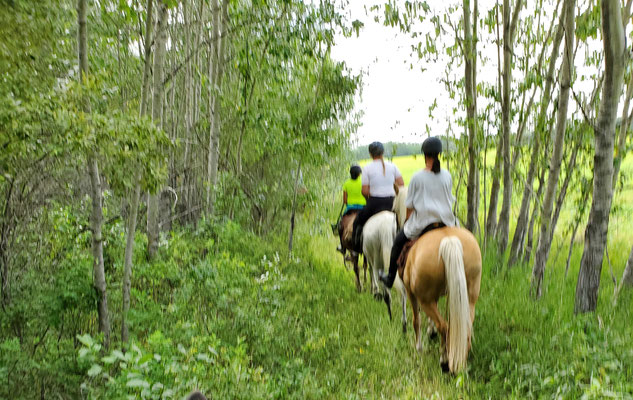 I believe that the tumult and challenges of 2020 gave us a new appreciation of ourselves.  We found that we were more resilient than we thought and that we could grow, change and learn a new lifestyle.  I listened to Queen Elizabeth’s message on Christmas Day and thought how well she phrased the feelings that I too have felt.  “around the world, people have risen magnificently to the challenges of the year, and I am so proud and moved by this quiet, indomitable spirit. To our young people in particular, I say thank you for the part you have played.”  I feel that there are many unsung heroes all over this country and around the world whose heroism has gone unnoticed.  If you know one of these people, please make the effort to Thank them for all they have done for their family, community, and country.

As the last hours of 2020 fade away, let us find Hope in our hearts for the start of a New Year.  As one of my friends suggested, perhaps we can give this 2021 a bit of a test before we become enthused.  “Nobody claim 2021 as ‘your year’.  We’re all going to walk in real slow.  Be good.  Be quiet.  Don’t.  Touch.  Anything.”  It almost sounded like the advice the government has been giving us these past 9 months.  We will probably have to continue to follow it for a while yet.  HOPEFULLY the next 9 months will see us be able to Run to our family and friends, give them a BIG HUG and SING together at the top of our voices in a rousing chorus of “Hallelujah”!

We’d like to invite you to Winning Ways to relax, connect with nature and perhaps gain inner peace. 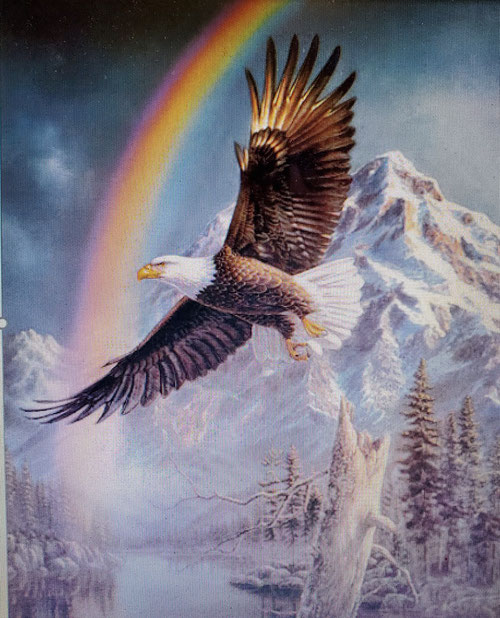 We hope that a visit to Winning Ways will steer you to a whole new world.  Soaring past 2020 and enjoying the next adventure.